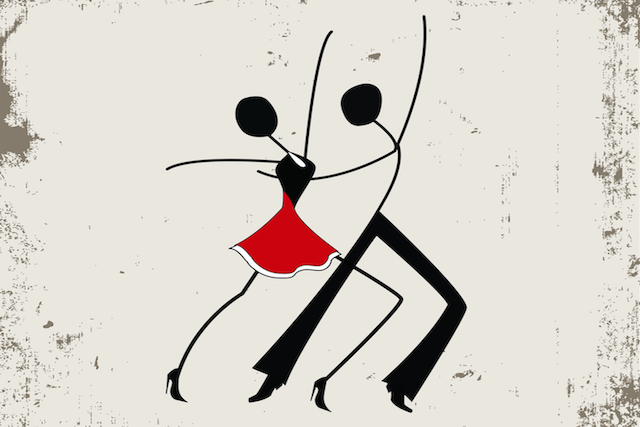 “You only live once; but if you do it right, once is enough.” ~Mae West

The other day, I saw a bit of a clip from a video of the Stones’ last world tour. Mick Jagger was prancing round the stage like an eighteen year-old.

It was a bit depressing. Why can’t I do that still?

I used to be a demon dancer. Well, I thought I was at the time, like teenagers do.

I don’t feel like a demon dancer now. I really ought to get some more exercise.

Do you feel like that? That you ought to exercise, but you can’t really get up the steam to do it? That somehow, it’s all too much hassle, even though we all know how important it is?

“Take care of your body. It’s the only place you have to live.” ~Jim Rohn

I’m always looking for some way of doing exercise that I enjoy and will stick with.

Are you like me? You’ve tried—not just tried; you’ve tried everything?

But it doesn’t work out.

I took up swimming before work.

You have to wear your work clothes and change in and out of them. Your hair gets wet and takes ages to dry. If you’re unlucky, you drop your suit jacket on the muddy changing room floor. So, you go to work with a jacket with a dirty stain on it. Plus, you smell of chlorine all day and get plantar warts.

When I was well into the corporate life, I went to a gym, but that wasn’t much fun. I was always tired, even before the extra journey to get there. There are all those incomprehensible machines to make you do unnatural things. It’s boring, nobody talks to anyone else, and the changing rooms smell horrible.

I took up running. That was better, although mostly still nobody to talk to. At least it was outside in the fresh air. I even ran to work sometimes, although you have all the shower and change of clothes difficulties at work then.

I did a few fun runs and that was a bit of a laugh—but I got quite fit! Then I had a small accident and suddenly running wasn’t a good idea any more. Bad for the back, bad for the knees.

Since then I’ve been sure to keep on walking. Every day. But it’s rather boring, doing the same walks over and over again. In the town, there’s all that pollution to deal with too. And it isn’t any fun at all when it’s raining.

No wonder people don’t get enough exercise—it’s all too difficult in today’s world.

Here I am, still not that fit and getting a bit less fit as each year goes by. Making the same old New Year’s resolutions.

The Science of Exercise and a Bit of Motivation

I came across an article about how scientists had determined the best exercise for a long and active life. Yeah, I want to live a nice long time. Show me where to sign up!

Scientific research shows that the best exercise you can get to live longer and in better health is dancing. What—old fashioned, may I have the pleasure, ballroom type dancing? (Well, it is very popular now.) How can that be the latest, best new exercise hack?

Did you go dancing when you were young? I did. Friends and laughter, and the music was great! It beat hockey practice, or netball or football or whatever sports we were made to play at school.

And the scientists agree! Dancing does much more for your body, your muscles, and your brain. You have to be disciplined, coordinated, flexible. You need good posture and strong muscles. You have to control your breathing.

It keeps your brain active, because you have to integrate so many different things at once—moving your arms, legs, and head in the right way, keeping in time to the music. You have to be aware of others on the dance floor and gracefully avoid them. You have to memorize the steps.

All that work makes your brain develop more cells and a bigger hippocampus. It helps protect you against memory loss, against cognitive decline.

It’s great for preserving your sense of balance; dancers don’t fall over as they get older and so they stay out of hospital and live longer.

It’s sociable; mostly you dance with other people. And you can practice at home if you want.

It lifts your spirits and stops you from getting depressed.

You live longer, you’re happier, you have more energy, and you make friends.

So, lots of scientific reasons to motivate you to get dancing.

“Exercise is a tribute to the heart.” ~Gene Tunney

They missed out the connection to the music.

Viennese waltzes by Johann Strauss. Musicals from the thirties, and every decade since. Rock music from the Beatles. Jazz by the likes of Charlie Mingus and Take Five by Dave Brubeck. Folk from Bob Dylan and Joan Baez. Pop from Abba. Latin American. Bollywood.

I love sixties music best. What can beat the Rolling Stones’ great hit, “Satisfaction” for a great dance number? Look, the Stones are still out there playing to the crowds. They are still dancing and show few signs of giving it up, for all their age. They look as though they love it.

So, we need to do something that actually want to do. We need to find ways of making exercise such fun that we’d rather be doing that than anything else.

If the music makes your heart sing, then dancing might be the exercise for you. Even if it just makes your feet tap and gives you a bit of an itchy feeling, dancing could be the way for you to get fit again.

Of course, if you love dancing already, then what’s to stop you?

With winter coming up (in the northern hemisphere), my husband and I have decided to put on one track a day and dance as hard as we can. We want to have fun together, bask in the nostalgia of music from our younger years, and get fit again.

We can’t think of a better way to do it.

Using Your Heart for Motivation to Exercise

Let’s follow our hearts and our hearts will look after us. We’ll be doing our brains a favor as well. Hearts and brains both love dancing.

Exercise won’t be such a struggle, and we’ll reap the benefits down the years.

Doing exercise right means that we’ll be living our lives right too and the one life we have will be a long, happy, and active one.

Go dance your heart out like the Stones and I’ll see you on the dance floor. I’ll be the one dancing down those long extra years I’ll gain from sticking with the exercise.

Having lived in twelve different countries and sailed the Atlantic in her own boat, Rosemary Bointon’s passion is thinking up new adventures and challenges for older people to do NOW, to help them have loads of fun in longer, more fulfilled and active lives. You can find her on medium.com/@RosemaryB and on Twitter at @Agingchallenges.

The post Why Scientists Agree That Dancing Is the Best Way to Get Fit and Live Longer appeared first on Tiny Buddha.

Previous Where Do Side Hustle School Stories Come From?
Next What Really Matters?