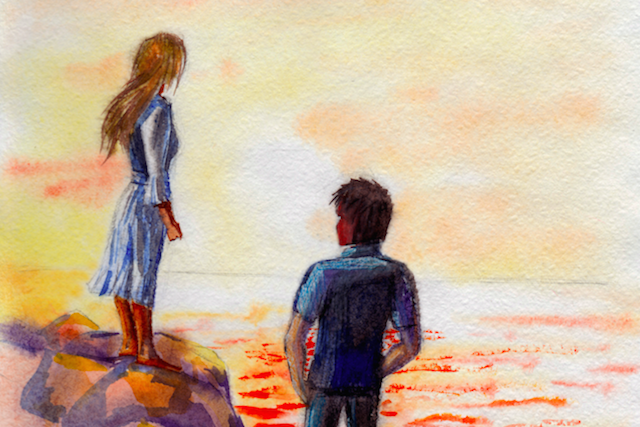 “Tis better to have loved and lost than to have never loved at all.” ~Lord Alfred Tennyson

I’ve always loved relationships—the euphoria of early romance, the comfort of built intimacy, and the experience of adventuring through life with someone else. While there are some pretty snazzy parts of being single, I was a sucker for love from a young age.

Now, I also didn’t meet my fiancé until I was thirty—which means I’ve seen my share of the romantic downside as well. With the highs of love come the lows of romantic breakdown: heartache, loss, and the grief of things not working out. Regardless of how they happen, breakups aren’t easy, and it’s common to think of a relationship’s ending as a failure.

The dictionary defines failure as “the nonperformance of success or expectation.” If the point of a relationship is to be together until death-do-us-part (or until we ride off into the sunset and the credits roll) then yes, a breakup is not exactly a success.

But what if that’s not the point? Maybe we can still strive for a love that lasts while reframing our ideas of the loves that didn’t.

The following is a compilation of lessons I’ve learned from my own “failed” relationships, a mixtape of why “failed” love isn’t actually a failure at all.

While our definition of that word may vary, I encourage you to read on with an open mind. There just might be more success in your own past than you previously thought.

1. Relationships teach us about ourselves.

Whenever one of my previous relationships was coming to an end, it usually began with the finding of incompatibilities—disagreements as small as where to eat or as large as whether or not to have kids.

The inconsistencies in beliefs often showed me more about myself than they did the other person. I had to date an atheist to find out how much I really wanted to believe in God. I had to date someone who liked to stay home to realize how much I liked being social. While finding these incompatibilities was anything but fun, in retrospect I see they were a map to finding myself.

2. Relationships show us where we can grow.

There’s a saying that I’ve always liked: “Relationships pour miracle grow on our character defects.” When I was in a relationship that pushed my buttons, I realized which buttons were there to be pushed: things about myself I wouldn’t have noticed until another person made them glaringly apparent.

For example, dating someone with a lot of female friends showed me that I was pretty insecure; while at first his social circle seemed to be the problem (how dare he hang out with other women, right?) over time I realized that it was my own self-esteem that needed attention. Although this “button pusher” relationship didn’t stick, it showed me where my work was.

Through examining my buttons (rather than the button pusher), I was better equipped to do the self-work that would allow me to show up more fully for every future relationship, romantic or not.

3. Relationships allow us to practice vulnerability.

It’s pretty scary to open our hearts up to another person. After all, none of us really know what the future holds, right? Those of us who have experienced our fair share of heartache have even more reason to be cautious: We know what it’s like to lay our hearts out on the line and give someone the option of smashing them to smithereens. (While it’s helpful to avoid this heart-smashing type of relationship, it happens to the best of us, and the possibility is always there.)

Regardless of how a relationship has ended, when I’ve allowed myself to fully open my heart to another person I am reminded that it was not a waste at all; it was a brick in the road of living my fullest life.

When in the throes of a relationship, we often have our heart set on not just our partner, but on our future with that partner. This is often the hardest thing about a relationship ending: You don’t just lose what you’ve shared, but the imagined future that you’d included the other in.

When that future vanishes, it’s common to look back on the shared past with regret. But what if expressing love, kindness, and shared intimacy is an end in and of itself?

As humans we love to keep our eyes on the outcome and the finish line, but forget that it’s the journey to that mountaintop that shapes us. As the quote above reads, “Tis better to have loved and lost than to have never loved at all.”

Whether the act of love is in the present or the past, it existed all the same—and if we allow it to do so, it can remind us of the most beautiful side of the human condition.

5. Our past loves played an important role in our lives.

Each person that journeys beside us on the road of life not only shapes who we will become, but also how we feel as we get there.

My first love and I moved across the state to pursue our individual dreams. While our relationship didn’t last, we were a safe haven for the other in an unfamiliar and daunting time.

On the flip side, those unhealthy relationships that, on the surface, appear all wrong can help us more wisely choose a partner in the future.

While it would be great to learn lessons from other people’s experiences, most of us have to find out what we want by trial and error—from dating a few (or a bunch) of the wrong people before we can identify the right one. Even the most painful relationships in my past helped me learn who I wanted to be with (as well as who I wanted to be) in the future.

Some endings are inevitable. Being able to see the positives in our past doesn’t mean those relationships have any business in our present. It does, however, mean that instead of looking at what we lost when something ended, we can remember what we gained as well: perspective, strength, and experience.

If failure is the nonperformance of success, then let’s demand to expect only growth from ourselves, and define success as the amount of love that we gave. Because love is never lost…

Melissa Pennel is a coffee drinker, over thinker, and empowerment coach in Northern California. Find more of her writing on her blog. Catch up with Melissa on Instagram, Facebook, or on her website.

Previous WDS 2018 Tickets On-Sale Now: Join Us Next Summer for an All-New Adventure
Next All Made Out of Ticky Tacky