I get angry when people say, “Well, he’s just a dog,” with an emphasis on just that sounds like a belittling snarl. Yesterday, I was told by the vet that Smarty (my dog of 6 years) has kidney failure and this morning I took him in to “put him down,” as they say. The thought of that spunky little being suffering for the rest of his life is more than I can handle. You see, we were best buds from the time I got him. The vet sent us home with antibiotics and fluids to administer subcutaneously in hope that we can save him. It might be a really bad infection that he can recover from. Time will tell.

I got him soon after I lost my house and everything else in the 2008 real estate crash. We had just moved into a rental and I was feeling pretty “down.” (Yes, those of us who preach positive thinking DO get down at times). We had gone to PetSmart to buy crickets to feed to my grandson’s frogs. The cricket selection was taking a long time so while I was waiting I went to the kennel “just to look” at the dogs. I wanted a puppy sometime “down the road” and, since PetSmart rarely had puppies, I thought it was safe to visit.

I walked through the kennel door and there, in a special pen, right in front of me, were three of the cutest puppies—ever. Little tan balls of wiggling fur and floppy ears. I sat in the middle of the three of them for the next hour until it was clear that one had picked me. I had, at that time, exactly $75 dollars in my bank account and I spent $65 of it to take this puppy home with me. It was a perfect purchase.

I had promised my grandson, Jack, that he could help me pick a puppy when I was ready to get one, but Jack wasn’t with us that week. So I called him, told him about the puppy, and said he could name him.

“His name is Smarty.” That was that. Jack had named him Smarty and Smarty it was.

Smarty had his own personality even as a tiny pup. Sweet natured but curious about the world around him, he would escape the yard any way he could. He went over, under and through the

fence or gate and ran through the neighborhood like a little tan streak of lightening. The harder I chased, the faster he would run. It was a game to him. There was no yard he could not escape. I eventually learned that if I simply stayed in the house and left the door open he would return all by himself. It’s no fun to run if there’s no one chasing you, I suppose.

His favorite thing to chew was shoes and any shoe left within his reach was fair game. My son seemed to replace his flip flops on a weekly basis because they were puppy-chewed beyond wearing. We bought Smarty a Kevlar chicken to chew. It was advertised as “indestructible” but Smarty didn’t know that. I still have the remains of that chicken—now just an orange rope with a knot in it. Smarty loves it still.

He isn’t a snuggler, but he loves to lay beside me on the couch to be petted and patted while I watch TV in the evening. During the day, as a puppy, he would play around my feet while I worked at the computer. Now he sleeps on a mat under the computer table.

When I moved from Scottsdale to Fountain Hills I discovered he loved to ride in the car. He sat in the car like the perfect passenger and looked out the window like a human who was taking in the sights. Since then he has been my constant car companion. If I open the window so he can stick his head out and let his ears flap in the wind he is a happy, happy dog. Sometimes we take a drive just so he can do that.

When we moved to Fountain Hills, he went to school. Obedience training and socialization were urgently needed and Dawn the dog trainer became our PetCo friend. He did well and graduated with “honors” (so to speak). There are some things he didn’t want to learn like not pulling on the leash but most things he still does on command.

After a few months here, we discovered the dog park and have been there almost daily for the past year and a half. He can run. He can play with other dogs. He can be relatively free.

All I have to say is “Let’s go to the doggie park” and he’s there in a nano-second wagging his tale so hard his whole back end wags.

We think it may be at the dog park that he got the “bug” that has sent him into kidney failure. We don’t know that yet. Time will tell.

And time is precious. We are doing everything we can to save him.

We will know if a few days if we will have him longer.

If you don’t know what unconditional love is, get a dog. They will teach you about acceptance, warts and all.

I believe the saying I just read on Facebook. “God saved the best til last in creation. And he said, I’ll reverse my own name and call you Dog!”

Not just a dog.

Growing Up with a Narcissist: How I’m Healing from the Abuse

Why I Was Desperate to Be with an Unavailable Man

My “Stress” Was Actually High-Functioning Anxiety 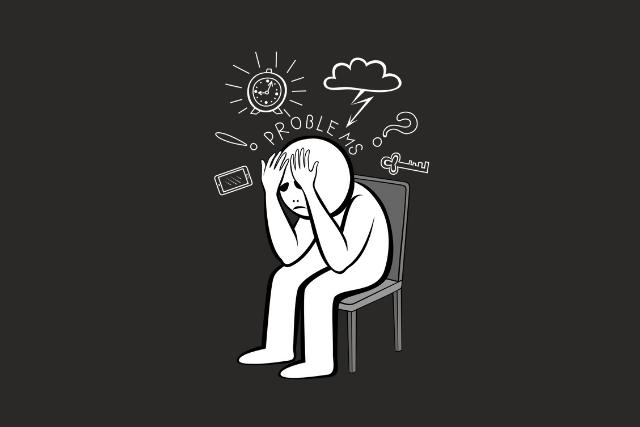 “Anxiety is like a rocking chair. It gives you something to do, but it doesn’t get you very far.” ~Jodi Picoult

Many years ago, I worked in the technology sector in Austin, Texas, which is a big “tech town.” I …

The post My “Stress” Was Actually High-Functioning Anxiety appeared first on Tiny Buddha.