6 Things to Remember When You Think You Don’t Matter 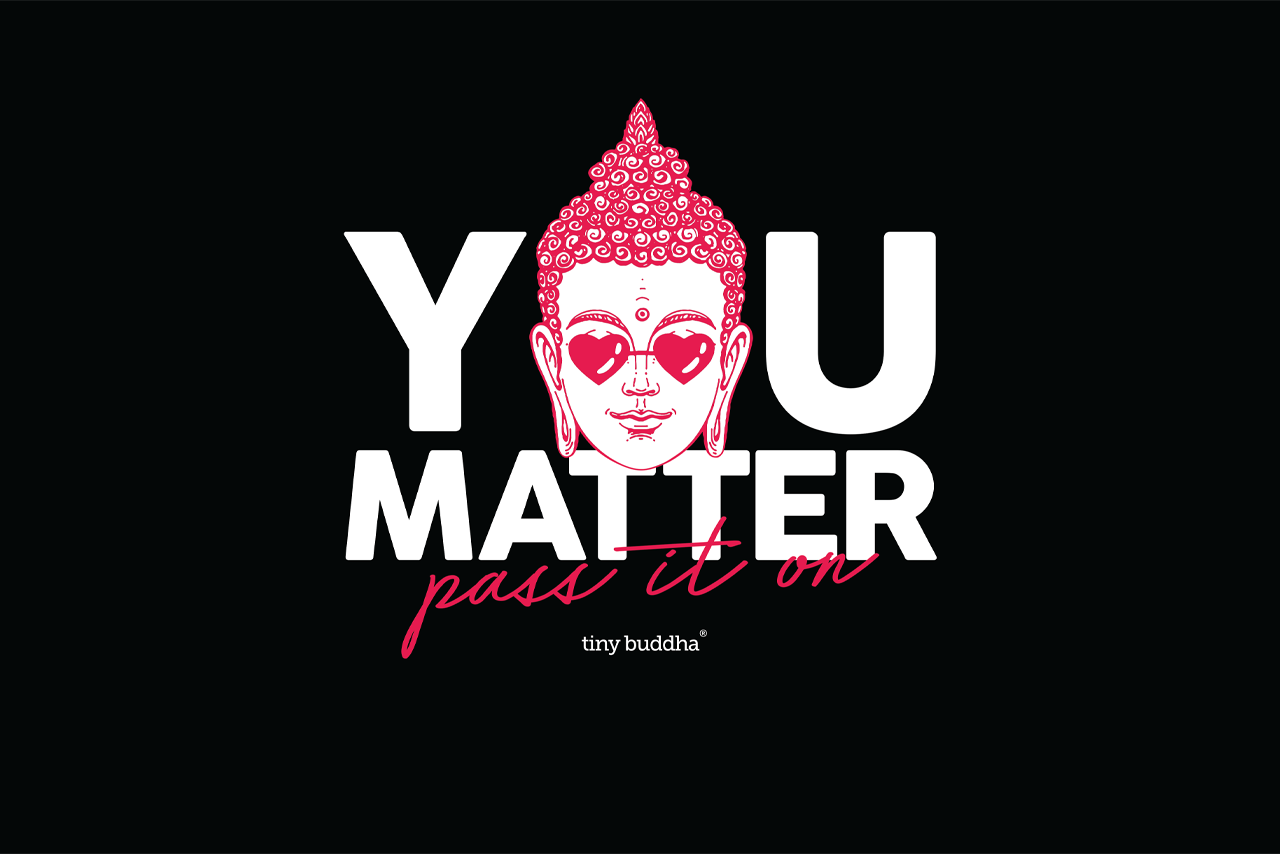 In a world with billions of people, in a culture that promotes being special and making a big mark, it’s easy to feel like you don’t matter.

Maybe you’ve felt it all your life—like you have no purpose, no value, and nothing to contribute to anyone around you.

Maybe you feel it off and on, when you’re struggling to find love or direction and think you need to somehow prove your worth.

Or maybe you know that your life has value, but every now and then, when your head hits your pillow, you wonder if in the end, it will matter that you lived at all.

I know what it’s like to question your worth. I grew up feeling inferior and unsure of myself, and felt lost and insignificant for many years after that. As an insecure introvert with high anxiety and low self-esteem, I simultaneously wanted to belong and hoped to find a way to stand out. So I could feel important. Valuable. Worth knowing, worth loving, worth remembering when I’m gone.

I’m also naturally a deep thinker, which means I’ve often questioned my place in the world and the meaning of life itself.

If you can relate to any of what I’ve wrote, I hope you’ll find some comfort in knowing…

We all struggle with the question of why we’re here, if we have a purpose, and if our lives will really matter in the grand scheme of things. Google “existential crisis” and you’ll find over 4.5 million results. Search for “I don’t matter” and that number shoots up to more than 100 mil.

On days when you feel insignificant it might seem irrelevant that others do too. And it is, if you only know, intellectually, that you’re not alone instead of truly feeling it. I know from personal experience the soul-crushing sense of separation you feel when you stuff your insecurities down and pretend you’re fine when you’re not.

So, open up. Tell someone what you’re feeling. Write in a blog post. And wait to hear “me too.” When you feel the comfort of belonging, remember that you provided that to someone else. And, that, my friend, is you mattering.

2. Just because you think you don’t matter, that doesn’t mean it’s true.

On days when I’m at my lowest, it’s often because I’m responding to an accumulation of physical and emotional challenges, sometimes without conscious awareness.

I’m exhausted from insufficient sleep, weakened from dehydration or poor food choices, and/or emotionally triggered by events that hit me right in my core childhood wounds. For example, maybe someone fails to respond to my email—for over a week—and this reinforces the belief I formed when mistreated as a kid: that there’s something wrong with me, and I’m not good enough and unlovable.

Add all those things up, and I’m primed to glom on to every negative thought that floats through my brain as if it were true. But they’re not. They’re judgments, assumptions, conclusions, and interpretations, all held in place by the glue of my current mood and limited perception.

The same is true for you. You might think you don’t matter today, and perhaps you did yesterday, and the many days before that too. But that thought doesn’t accurately reflect your reality; it merely represents your perspective in those moments. A perspective shaped by many things, some deep below the surface.

3. When other people treat you like you don’t matter, it’s about them, not you.

Speaking of core childhood wounds, many times when we think we don’t matter it’s partly because other people have treated us like we don’t—and possibly from the day we were born.

If you were abused, neglected, abandoned, or oppressed, as a kid or in an adult relationship, it’s easy to conclude you somehow deserved it. But you didn’t, and you don’t. No one does.

Unfortunately, the beliefs formed through abuse are insidious because they impact not only our self-worth but our sense of identity. And it can be difficult to untangle the many intertwined threads of who we believe we are, and why. But even if you’ve just started on the long road to healing, sometimes it’s enough just to recognize you formed a negative belief based on how you were treated—and you can, in time, let it go.

4. You don’t have to do big things to matter.

It’s easy to feel like your life doesn’t matter if you aren’t doing something big—if you’re not saving the world, or running an empire, or traveling the globe with the hashtagged pics to prove it.

But meaning doesn’t have to come only from accomplishments—and sometimes the most traditionally successful people are actually the most unfulfilled. If you’re too busy to enjoy the money you’ve earned, does it really have any value? If you have more followers than true friends, can you ever really feel loved?

Big things feed the ego, there’s no doubt about it, and yes, they make an impact. But when you reflect on the people who’ve mattered most to you personally, is it a CEO you visualize? Or a celebrity? Or a medalist? I’m guessing it might be a teacher, or a grandparent, or even someone who entered your life only briefly yet had a profound influence on the path you took simply because they listened and truly cared.

5. You’ve made a difference to far more people than you likely realize.

Since we’re in the thick of the holiday season, it seems appropriate to cite one of my favorite movies, the classic It’s a Wonderful Life. Cliché, I know, but fitting, nonetheless.

When George Bailey was standing on a bridge in a whirlwind of snow, with a bottle of booze and a brain full of regrets, he had no idea just how many people he’d impacted over the years through tiny acts of love and kindness.

He saw his life as a montage of failures and missed opportunities, when, to others, he was the light that led them home on a dark, scary night. And he may never have known it if life hadn’t provided a compelling reason for people to rally around with support.

Let’s face it, life is often hard for most of us. We’re all healing our own wounds, dealing with our own day-to-day struggles, caught up in a web of our own dramas. And we all have a negativity bias, which means most of us spend more time scanning our environment for potential threats than recognizing and appreciating our blessings.

You are someone’s blessing, and probably have been many times over. You’ve said the right thing at just the right time, without even realizing they needed to hear it. You’ve offered a smile when someone else felt lonely, without realizing you eased their pain. You’ve been someone’s friend, their resource, their champion, their safe space, their inspiration, and their hope. To you, it was just a text, but it helped them hold it together. To you, it was just a hug, but it kept them from falling apart.

As someone once said (but I’m not sure who), “Never think you don’t have an impact. Your fingerprints can’t be wiped away from the little marks of kindness that you’ve left behind.”

6. You matter to people you haven’t met yet (or who weren’t even born yet).

It’s easy to feel like you don’t matter if you don’t have people in your life who reflect your worth—friends, family, a significant other; anyone who values you and shows, through their words and actions, that they want and need you in their life.

But just because you don’t feel important to anyone right now, that doesn’t mean you never will. There are people you’ve yet to meet whose life highlight reel will get better in the middle or at the end because that’s when you came in. There are friends you’ve yet to make who will finally feel like they have family because you’ve filled a hole no one else could fill. And maybe one day a pair of tiny arms will squeeze you tight and remind you that you matter more to them than anyone else ever could.

The story of your life is only partially written, and there are leading roles yet to be cast. If your current scene feels lonely or empty, remember that every great story brings a protagonist to the lowest low before catapulting them to the highest heights.

If there’s one thing I’ve learned over the years of running this site, it’s that beliefs precede actions, which then confirm beliefs. If you believe you don’t matter, you likely won’t do anything that could matter, and then you’re all the more likely to feel unimportant and alone.

But if you hold onto any of what I wrote above, you’ll be far more likely to do something with your life—or even just with your day—that could make a difference for the people around you.

Maybe you’ll offer someone an ear or a hand or a piece of your heart or create something that helps or heals.

And in that moment when you see your impact, you’ll realize what it truly means to matter: to know your value and create a little more love and light in the world by giving it away as often as you can.

**After spending the last decade devoted to this site, I now want to provide value in a new way, so I’ve poured my heart and soul into a screenplay that I believe you all would love. It’s a story about a man with terminal cancer who tries to become famous in his final months to prove his life matters before he dies. If you’d like to help support this dream, and you like the image on the top of this post, I hope you’ll consider grabbing a shirt, mug, or water bottle here to help me raise development funds. Thank you for your support and for being part of the community!

Lori Deschene is the founder of Tiny Buddha. She’s also the author of Tiny Buddha’s Gratitude Journal and other books and co-founder of Recreate Your Life Story, an online course that helps you let go of the past and live a life you love. For daily wisdom, join the Tiny Buddha list here. You can also follow Tiny Buddha on Facebook, Twitter, and Instagram.

The post 6 Things to Remember When You Think You Don’t Matter appeared first on Tiny Buddha.

Previous Critical Things to Know About Glaucoma
Next Why Should You Consider Pilates As an Exercise Regime? 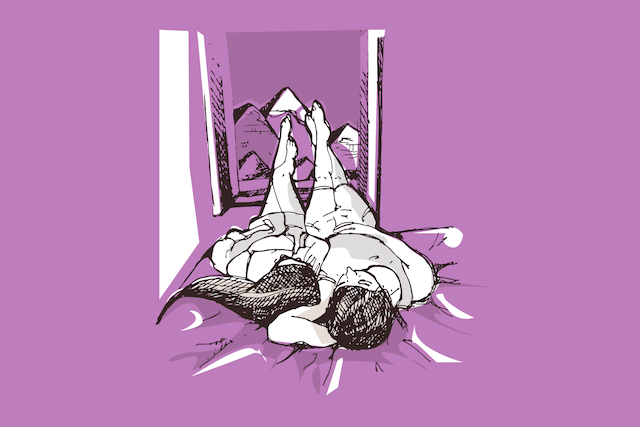