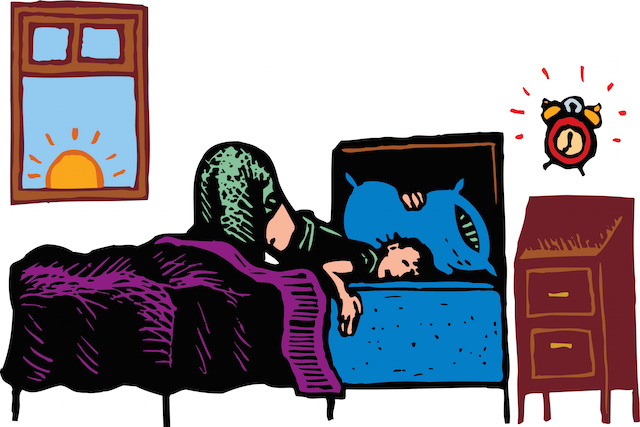 “If you have a bad day, remember that tomorrow is a wonderful gift and a new chance to try again.” ~Bryant McGill

As I crawled back into bed after hitting the snooze button, my eyes heavy with sleep, I told myself, “You gave up once more” and rolled over back to sleep, annoyed with myself.

When I started the new habit, it felt amazing. I was so proud of myself—I was doing it! On top of the satisfaction of achieving goals that I had set for myself, I really felt the benefit of being productive before everyone wakes up. It had a positive knock on effect on the rest of my life; I was upbeat, motivated, and I was going to work with a spring in my step.

Then, about two months in, normal life happened: I had been to bed later the previous nights—drinks with colleagues, watching a movie—and tiredness, coupled with maybe the weariness of the new habits, quickly took over. That morning, I did not jump out of bed and I was longing to roll over instead of starting my “miracle morning.”

If you are a human being like me, I am sure you are very familiar with taking up new habits, only to give them up two or three weeks or months later. The most notorious one is New Year’s resolutions. Who hasn’t promised themselves they’d go to the gym three times a week, they’d stop eating junk food, or they’d stop drinking alcohol altogether?

We take up new habits, only to let them die away after few weeks.

Have you noticed how different the feeling is between when you start and when you give up?

When we start on January 1st, we cannot imagine there will be one more day in our life when we will not jump out of bed to go to the gym. We wonder, “How could I ever not have the motivation? It’s so exciting! And how did I not do it before?”

There’s indeed a very negative effect on your life if there’s constantly a little voice in your head reminding you that you have failed this or that. My aim here is to help you feel good about yourself, even with the fallibility of being human and not being able to sustain new habits.

You don’t have to beat yourself up for giving up new healthy habits. You’re not the only one out there; we’re all doing it (or not doing it).

I used to be very annoyed with myself when I stopped a new routine, as it gave the feeling that my goal had not been achieved. However, unless you are in a life-threatening situation and seriously need to change your lifestyle, I think that we need to take a different perspective on things.

Yes it could be better, but you cannot deny that you have, for whatever small amount of time it happened, spent your life doing something else that was better for yourself.

There are few ways that we can make these new habits easier to handle. I think we should focus more on the fact that even if we haven’t sustained it, we’ve done something good for ourselves. Here are three main elements you should consider:

1. Set a limit in time for your new habit.

If you suspect you will sooner or later give up on it anyway, why not set the end date when you start? This may sound simple, but the big difference is that you are in control of when you stop. This will also make it easier to digest, and you might be more likely to sustain the habit longer than if you hadn’t set yourself an end date.

I’ve tried the experiment myself. On June 7th, I started a new healthy habit: wake up early, meditate, write, read news. I was of course excited about this new habit, but I thought I’d end up giving up anyway, as I had with all other healthy habits outside of my comfort zone.

Then I had this idea: What if I tell myself that it’s labeled “summer healthy habits” and that I only have to sustain it until August 7th? Would that not make it easier? You can reduce it to one week if you tend to give up after few days.

2. Reflect on what you have learned or gained, even if the habit has stopped.

Stopping doesn’t mean you haven’t done anything productive. For three months, you did something different, and surely your brain or body benefited from it.

I recently decided to test not drinking any alcohol at all on Friday nights with the colleagues at the pub. Surprisingly, I was as upbeat and enthusiastic as the night wore on, same as when I was drinking on a typical Friday night.

This was a revelation to me! When I thought that my enthusiasm was related to my alcohol intake, it actually wasn’t; I was “drunk with social interaction.” This is exactly my point: I only did this two Fridays in a row, but I learned something about myself that I can take away for the future.

3. Step back and reconsider.

Working at intervals is a healthy process in a lot of disciplines. As a runner, it’s scientifically proven that I’ll be better off alternating fast and slow intervals during a run, and alternating workouts and rest over the course of a training plan, rather than always running at the same pace or running without ever recovering.

It’s the same for the learning process: When you study for your final exam, it’s well known that taking breaks or moving on to another activity for a while is beneficial for the brain.

We could even take a broader perspective: Living a healthy life is all about balance. Why not alternate the healthy new habits? Some examples: Stop eating bread for one month, then go back to your usual levels of consumption. Go without alcohol on Friday nights for one month, then stop. Life is also about experimenting different things.

Thinking about stopping this habit that I enjoy so much (mind you, it’s day two!) makes me sad, but after all if I want to keep it going, I can. But at least if I do stop on my planned end date, I won’t feel guilty and unaccomplished, because that was part of the plan. I will feel that I have achieved my goal, even if the habit only lasted a month. Then hopefully I can be excited to take it up again when I come back home.

It’s great that you are trying to change your life for the better, but it should not have the consequence of making you feel bad about yourself for not sustaining it. If it does, it will create stress and be counterproductive.

Take small steps toward a healthier lifestyle, enjoy the process, and take time to reflect on what you have learned about yourself. That’s the best way for your body and your mind to benefit from the change.

Barbara is a business consultant, mentor,  and life coach. Her mission is to empower women who want to change their life: break through their limiting beliefs and achieve their dreams. Through networking events, workshops, and coaching sessions, Barbara helps women get the motivation and the confidence to get out of their comfort zone and achieve great success. Visit her at www.barbaraguignard.com.

The post 3 Tips for Anyone Who’s Tired of Trying to Make New Habits Stick appeared first on Tiny Buddha.

Previous Why Social Media and My Addictive Personality Don’t Mesh
Next Speak Up: Share Your Story So You Can Get Past Your Shame